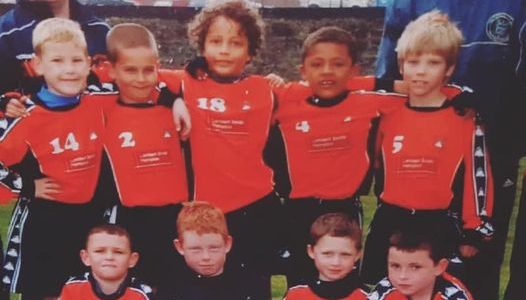 Young Phil shone in his Vulcans team along with several of the other players. Together, they went on to win several tournaments, notably our own legendary tournament – The North West Junior Champions League.

(Image copyright by Reddish Vulcans JFC. No unauthorised use allowed).

Whilst playing for the Tornados, Phil became the focus of the scouts from Manchester City and in 2008, Phil signed for City’s world renowned Academy.

“Foden… Phil Foden. Remember the name folks, a left foot to die for”

We have all seen Phil’s career go from strength to strength with Manchester City and England.

Vulcans President Joe Makin pictured with Phil just after he was awarded The Player of the Tournament at the 2017 Under 17’s World Cup.

{Image copyright by Reddish Vulcans JFC. No unauthorised use allowed).

Phil recently scored a Hat-Trick against Manchester United along with team-mate Erik Haaland.

Haaland became the first player to score a Hat-Trick since City legend Francis Lee in 1970. Phil emulated that feat, a few minutes later.

Phil and Erik have become a formidable pairing in City’s line-up, and we can’t wait to see what’s in store for the rest of the season.

Everyone at Reddish Vulcans JFC are all extremely proud of Phil and wish him all the best in his career.

So, where did it all start for Phil?

Reddish Vulcans Soccer School is the correct answer you are looking for.

If you want to join Reddish Vulcans JFC please click the link below for further information.